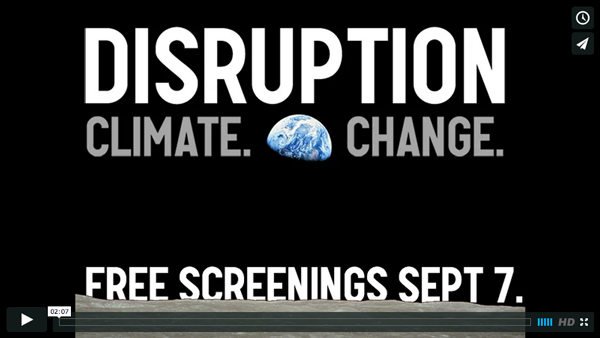 ‘When it comes to climate change, why do we do so little when we know so much?’

Slated for release and screening across the country on this Sunday, September 7th, one new film follows a relentless investigation to find the answers on climate change. On the heels of a climate change draft report synopsis released from United Nations (U.N.) last week that stated that climate change may be irreversible at this point, the documentary Disruption takes an unflinching look at the devastating consequences of inaction.

The exploration goes deep into the science, the broken political process, the industry special interests, and the civic stasis that have brought the world to today’s social, moral, and ecological crossroads.The film also takes us behind-the-scenes of the efforts to organize the largest climate rally in the history of the planet to demand change just before the U.N. Climate Summit in New York City on September 21st—the People’s Climate March will undoubtedly be a historic convergence.

According to the Disruption‘s producers, “This is the story of our unique moment in history. We are living through an age of tipping points and rapid social and planetary change. We’re the first generation to feel the impacts of climate disruption, and the last generation that can do something about it. The film enlarges the issue beyond climate impacts and makes a compelling call for bold action that is strong enough to tip the balance to build a clean energy future.”