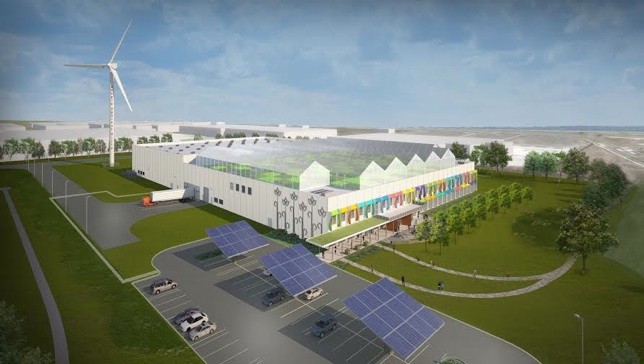 Sitting Pretty: Method's plan for the world's largest 75,000-square-foot rooftop hydroponic greenhouse
Method announced plans this week to truly raise the bar in sustainable manufacturing facilities. The green cleaning giant—maker of soaps, cleaners, detergents, and more—revealed plans for a 75,000-square-foot, state-of-the-art rooftop greenhouse that will be the world’s largest rooftop structure of its kind.
Sitting squarely atop Method’s 150,000-square-foot production and distribution complex, this farm-to-table urban garden will be capable of producing a more-than-impressive 1 million pounds of ultra-fresh, pesticide-free herbs, vegetables, and leafy greens each year. Where will this motherlode of food be used? According to Method, the harvest will be distributed to Chicagoland restaurants and farmer’s markets plus community groups on Chicago’s South Side, where the Method facility is located.
The company’s $30 million facility is currently being built—and the rooftop greenhouse is slated to open by next spring. Method’s new building will also boast on-site wind turbines and ground-mounted solar panels. It aims to become the very first LEED Platinum-certified production plant in the packaged goods industry. Due to open early next year in Pullman, a historic manufacturing hub and residential district on Chicago’s South Side, the facility will be the first domestic production plant for the San Francisco-headquartered Method—and it’s European owner Ecover.
The new rooftop garden will be overseen by Method in partnership with Gotham Greens, a Brooklyn-based rooftop farming firm that has been cultivating produce on New York City rooftops since 2011.
Says Viraj Puri, co-founder and CEO of Gotham Greens, in a joint press release issued by Gotham Greens and Method:

Chicago has shown remarkable leadership in urban farming and green building over the past decade and we’re thrilled to be contributing to the trailblazing work being done in these sectors and furthering Chicago’s position as one of the greenest and most innovative cities in America. We’re particularly honored to be partnering with Method and the Pullman Park development and community. We are dedicated to providing our customers and local residents with the freshest and best tasting, hyper-local produce available, 365 days of the year.