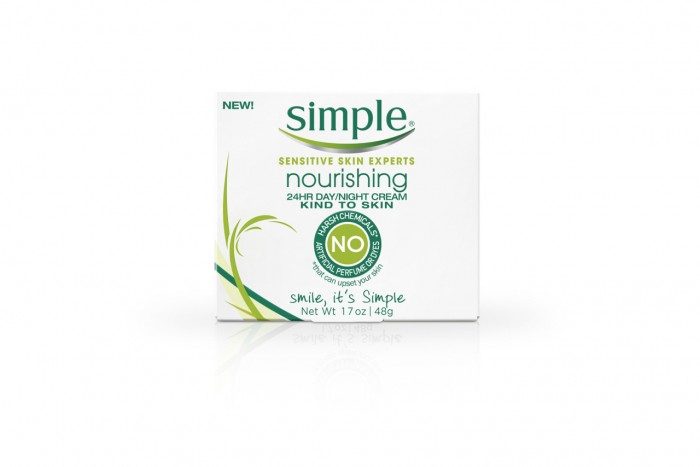 We love simple, especially when it comes to skin care and ingredients. Which is why the new Simple® skin care line piqued my interest when it landed on my desk.

Recently launched by the global consumer products company Unilever, Simple is a range of facial skin care products that aims to keep things, well, simple. According to the company, Simple products are free of harmful parabens, artificial dyes, perfumes, and harsh chemicals. They are also hypoallergenic and pH balanced.

Originally designed to care for sensitive skin, the Simple brand was born in the United Kingdom in 1960 and it was the first to create a cleansing product with no perfumes or colors. Today, Simple is the UK’s Number One skin care line. Simple recently made its debut in the US.

The promise of proven, chemical-free skin care at an affordable price was highly appealing, so I took the Simple skin care Nourishing 24-Hour Day/Night Cream ($10.99 for 1.7 fl. oz.) for a test drive. Crafted with moisturizing shea butter, this cream feels rich to the touch and it goes on smoothly, without a greasy after-effect.

I noticed a smoothing, moisturizing effect to my skin after just a few days of use of this cream in the morning and evening. Simple’s Day/Night Cream also delivered a smoothing effect via the soothing Oat Kernel Oil and Oat Kernel Extract. Other effective ingredients in this product’s mix include nourishing vitamin E and Pro-Vitamin B5, which has been shown to replenish and soften skin.

Bottom line: I found this to be a solid, effective, and affordable cream that offered noticeable results, including a moisturizing effect (even in the ultra-dry Colorado climate in which I live). My only gripe is that, because of this product’s oat ingredients, it is not gluten free, which may be a deterrent for some consumers.

To learn more about the Simple skin care range—and its ingredients—check out this handy ingredient glossary look-up page on the Simple website.