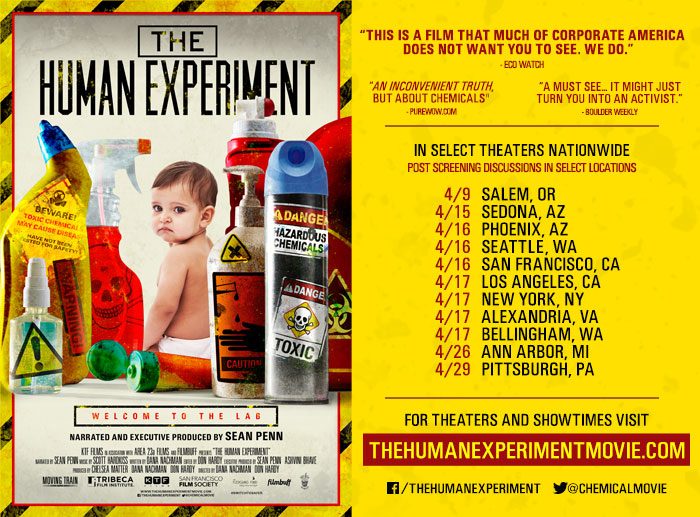 Chemicals are everywhere—and they’re often untested and bad for our health.

That’s the premise behind The Human Experiment, a film narrated by Sean Penn that hits theaters this weekend + video on demand. According to the filmmakers, “The Human Experiment lifts the veil on the shocking reality that thousands of untested chemicals are in our everyday products, our homes, and inside of us. Simultaneously, the prevalence of many diseases continues to rise.”

Produced by Oscar® winner Sean Penn and Emmy® winning journalists Dana Nachman and Don Hardy, The Human Experiment tells the personal stories of people who believe their lives have been affected by chemicals and takes viewers to the front lines as activists go head-to-head with the powerful and well-funded chemical industry. These activists bring to light a corrupt system that’s been hidden from consumers—until now.

The Human Experiment is well worth watching. The flick is receiving rave reviews from the media. According Eco Watch, “This is a film that much of corporate America does not want you to see. We do.”

Check out The Human Experiment film trailer below and see out our prior coverage of this important flick here.